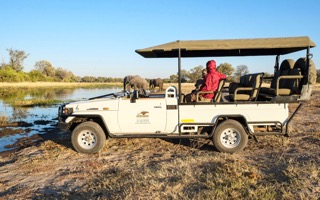 I always ask my gods of the San whenever I start my safaris to give me strength, power, safety and show me the hidden secrets of the bush. On our way to Khwai we stopped for a short moment to ask our gods to join us into their world, I explained to Christine and Graham what this ceremony means to me. This is history that has gone on for years and it works and saved lots of the san people in the bush, this is not just a demonstration, when you do it you have to do it right. The secret that a lie behind it is that the ceremony determines your safari, you do it right you get the right results.

We gathered grass in our hands and called our forefathers and mothers asking for good fortune on their land. I felt the connections right there, we did it right and it was for us now to wait for the results, which came faster than I expected.

The ten days safari ended in just five days in the Khwai area, the safari was done and dusted. I have this special connection with Khwai, when my father was alive and I was a small boy we used to walk a couple of days from Xhamoxwii (where I was born) to Khwai to visit our relatives, since then, this area became one of the places that touches my heart. Five nights in Khwai was total drama, we witnessed scaring moments sometimes. Everything started sparking from our first game drive, we saw hundreds of elephants along the Khwai river, they never stopped coming to the river it almost looked like ants. Among the big herds were some bulls following females, it looked like they were 1 or 2 females on oestrus and this bulls were seriously challenging each other. One bull on marsh gave us a full charge, I ended up driving away from him. On our second day we had a beautiful young female leopard and in the afternoon we closed the day with a pack of African Wild dogs feeding on an Impala carcas they killed a couple of minutes ago. 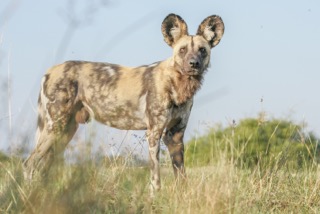 Still in Khwai we had hyenas around our campsite every night and elephants passing through. On the third day we had outstanding drama, it started with me suggesting to the guests that we go on a day trip into Moremi game reserve. We left early that morning and headed towards Xhini area. Just before we got to Xhini we saw about 12 hyenas, they were following a pack of Wild dogs. We didn’t see the wild dogs but we could see their fresh tracks. Suddenly our vehicle was surrounded by hyenas, sniffing our vehicle tyres you would almost touch them, amazing animals. We had enough of the hyenas and carried on with our plan. When we got to Xhini lagoon we found a female cheetah on red lechwe kill, she was a bit shy but we had lovely view of her. We peacefully left her and carried on, then drama started. 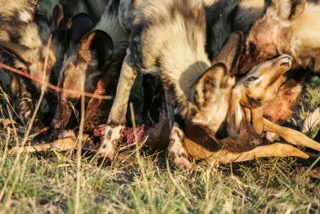 We found tracks of lions and followed them, about 10 minutes we found them finishing off a carcas, we found 2 big males, 3 females and 2 cubs. We couldn’t identify what they have killed but we suspected something small like Impala because they were not all full. After watching the cubs fighting over the bones we drove closer to the males to take a closer look at them, the males didn’t even blink when we got to them. just when we wanted to carry on and I tried to start the vehicle, it failed to start. We started contemplating whats next, I wanted to jump out of the vehicle to open the bonnet and figure out what could be wrong with vehicle. I’m planning this idea and we are about two meters away from 2 big males lions and a lioness. I thought again, “this is not a good idea”. We now have to wait until the lions move further, but who knows when as they just settled down. At that point our radio cannot reach our back up guys, we were far from camp and there was no other vehicle closer by. I lost patience and tried to come out of the vehicle, then suddenly our friendship and trust with the lions broke. They charged us full on, growling and tails flipping from side to side. I set back fast and they kept watching us and never turn their back on us, they charged at any little movement in the vehicle. We were in some kind of prison for almost 2 hours, starring at one another. Finally the females with cubs started moving away, a sigh of relief, then the males followed. One male kept his eye on us and didn’t go far. I took advantage of that little movement, I crawled down from the vehicle and went to the front to open the bonnet. Christine and Graham did great to do as I told them, they didn’t blink but kept their eyes on the lions while I tried to find out what was wrong with the vehicle. After a while I found a fuel cable that snipped off and was able to put it back. The vehicle started one kick you should have seen us celebrating, no goodbye to the lions. 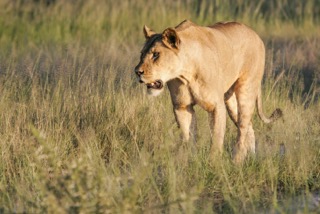 Day four was good as well, we were at Magotho. We saw a Porcupine scaring 6 lions and ran off. We continued from there and found 2 male lions wrestling over a baby buffalo carcas, this was an amazing sighting to watch, good brothers become enemies. The wrestling went on for about 2 hours until one started a smart technique, he started feeding on the carcas while his brother was holding on, that did not sit well with the brother more so that the carcas was getting less and less. The brother who was eating had enough and left the carcas for his brother. After the wrestling, on our way to camp we saw a female leopard and she did her show as well. She sported a herd of Impala and started stalking, unfortunately she is enemy to many, a tree squirrel saw her and was warning the Impala. The hunt folded as the Impala spotted her.

Day five was named the leopard show, a male leopard killed a baboon at night and dragged it up a tree by our campsite, a handsome male. We saw him go up the tree and coming down.
A combination of Moremi game Reserve and Khwai Magotho is unbeatable during this dry month, fantastic sightings almost every day. If we were tickers of predators and big game I would say the safari was over, but that’s not how the bush works, you don’t know what will come next, that makes even more funnier. It is a game that you have to play it smart.

We left Khwai and headed off to Savuti for 2 nights and continued to Chobe Ihaha area for one night, we were booked to stay 2 nights at Ihaha but the guests felt they had enough with animals and had seen what they wanted. We left a day earlier to Kasane where we enjoyed wifi at Kwalape lodge. The worst thing on safari is that last day when you have to say goodbye to your friends that you have been travelling with for almost 2 weeks, always hard for guides, especially if the guests were easy going and sweet like Graham and Christine.

Incredible moments throughout, a total of 17 lions, 3 leopards,1 cheetah,15 spotted hyenas, 20 wild dogs, hundreds of elephants, buffalo and many other general game and birds. Not only seeing big numbers but quality sightings, experiencing animal behaviour at its outmost.