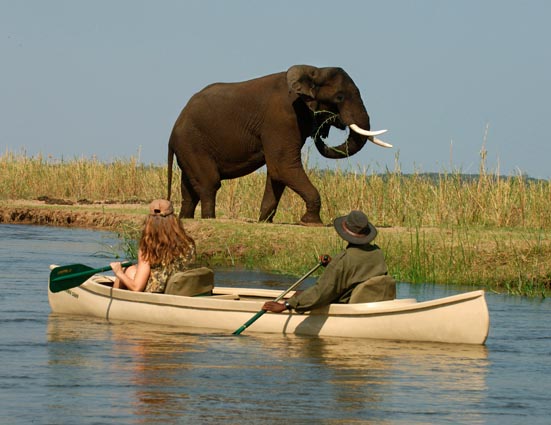 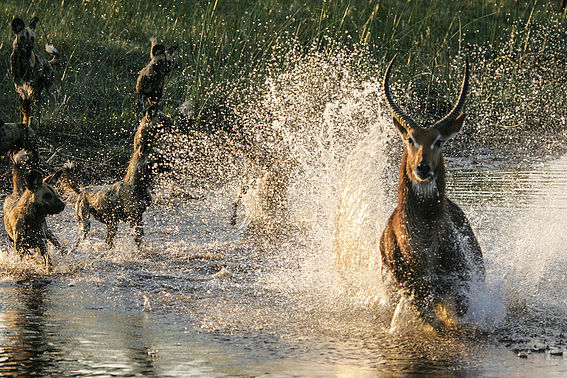 This is the moment a brave antelope dived into a hippo-infested lagoon to escape a pack of wild dogs who were determined to eat him for breakfast.
The male waterbuck-lechwe hybrid was being chased by a pack of 24 wild dogs at sunrise when he made a dash for the watering hole on a safari reserve in Botswana.
Safari guide Kane Motswana watched as the young male skipped into the water before turning and lowering his horns, managing to keep the hungry dogs stuck on the bank.
The hounds made several charges in an attempt to flush the hybrid out of the water, but he held his nerve despite being surrounded by hippos, who are notoriously ill-tempered and territorial.
Eventually the dogs lost interest in their quarry and took off, at which point the hybrid emerged from the water to make his getaway.
Kane, 35, said: ‘It was early in the morning when the pack of dogs – 13 puppies and 11 adults – were hunting.
‘They found the waterbuck-lechwe hybrid and chased him into the water.
‘Both the waterbuck and the red lechwe are well adapted to the water and this hybrid, a combination of both, was a very powerful animal able to fight off the wild dogs.
‘They did manage to push the antelope out of the water though, where they knew they would have more of an advantage, and at one stage I thought for sure they were going to be successful. But then he ran straight for the lagoon and continued fighting.
‘The waterbuck-lechwe was standing in the water in the company of hippos – a very uncomfortable spot as hippos don’t like others in their territory.
‘They were disturbed by the commotion of the fight and wanted the antelope out, but he bravely waited until the dogs left before he made his escape.
‘After hours of waiting on the side of the lagoon, the dogs realised their efforts were futile and decided to escape the heat.
‘I am out guiding in the field almost every single day and I have never encountered a sight so magnificent before.
‘This is definitely in my top ten safari experiences.’